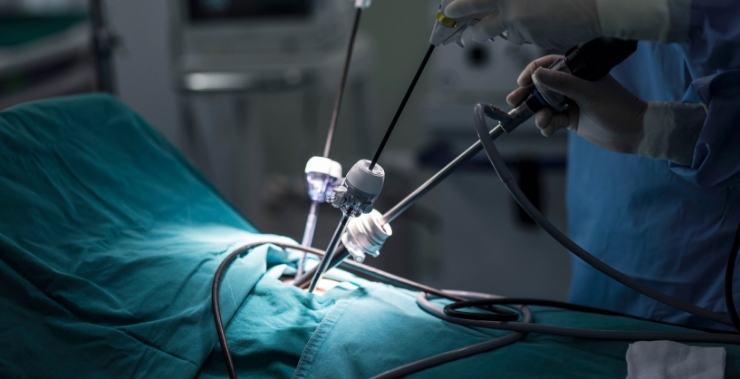 There was a time quite a number of gynaecological surgeries done in Nigeria and many parts of the developing world were done through cutting wide open the abdomen to get access to the ovaries, womb, uterus, or Fallopian tubes amongst others.

These procedures can now be done through what is known as Laparoscopic surgery.

In the past, this technique was not so readily available, but these days, the feasibility of laparoscopic surgery particularly in Nigeria is more common.

Laparoscopic surgery also known as “minimally invasive” surgery or “minimal access” surgery is fast gaining ground in Nigeria just like the rest of the world. It is cheaper, less complex and presumed safer than open access surgery and, hence, brightens the future of gynaecologic surgery.

Laparoscopy is now utilized to carry out virtually every medical procedure that can be done through open surgery in gynaecology, ranging from surgeries involving the uterus, fibroids, early stages of ovarian cancer, and difficulty in getting pregnant from blocked Fallopian tubes.

More commonly, a laparoscopy is used to diagnose and treat women with infertility problems. What this amounts to is that a laparoscopy of the reproductive organs (a gynaecological laparoscopy) is quite often necessary.

Many different issues can cause pelvic factor infertility. These include scar tissue from infections, injuries or surgeries, or problems like endometriosis, ovarian cysts, or fibroids in the uterus can all affect how a woman’s reproductive system functions.

Laparoscopy can be used to diagnose issues that often cannot be seen on an ultrasound.

Infertile couples trying to resolve their issues often stand to benefit from the procedure. For instance in selected couples with infertility from blocked fallopian tubes, surgery can be done laparoscopically for them to attain pregnancy.

Further, if your womb has to be removed for any reason, it can be done laparoscopically. Clinically, this procedure is almost infinitely useful in gynaecology practice particularly because the trauma of opening somebody up with a wide incision and the challenge of recovery afterwards is completely removed.

The opening is minimal just like a “keyhole” and it allows the body to recover much faster unlike opening up the womb through the normal traditional method, in which you would have been on admission for a number of days, but in laparoscopy, you can return home within 24 hours.

I presume you are aware that the most common cause of female infertility in this environment is often tubal blockage as a result of infections. The advantage of laparoscopy is that when used to diagnose, it can also be used to treat, the limitations is often the expertise and experience of the surgeons.

Even fibroids are better tackled laparoscopically than with open surgery if they are not too large. Better still, laparoscopy tends to be cheaper than open surgery because it is associated with shorter hospital stay. What is more, blood loss is minimal.

During a gynaecological laparoscopy, following a general anaesthetic, a small incision will be made in your abdomen (small is good for risk reduction and recovery).

A thin tube, with light and camera attached (laparoscope) is guided into your pelvic area.

Secondary incisions may also be made nearby, allowing small surgical tools and gas to be pumped in, creating a better view of your reproductive organs. The aim is to seek out cysts, fibroids, endometriosis, ectopic pregnancies, pelvic inflammatory disease, adhesions, infections and other issues that may be affecting your fertility. It lasts up to 60-90 minutes, depending on what’s done.

Depending on the procedure involved, it is often an outpatient surgery, allowing you to go home after a few hours in the recovery room, though in some cases you may need to stay overnight at the hospital.

Many couples with “unexplained infertility” can benefit from laparoscopy to check for abnormalities in the woman. Conditions such as endometriosis could be picked up this way.

Unfortunately, endometriosis cannot be cured, but it can be managed through non-invasive procedures before surgery. If you are trying to get pregnant, the treatment option is usually either surgery or IVF as medication used for Endometriosis usually stops ovulation and therefore prevents pregnancy.

A laparoscopy is usually the surgery of choice to treat endometriosis. It involves removing the endometrial growths while protecting the ovaries and uterus.

One to three tiny incisions is made near and around your navel. Through one of these small cuts, the surgeon inserts a laparoscope, through which she or he can view inside. More instruments will be inserted in the other cuts to scrape out the growths.

It’s natural to ask whether you can get pregnant after endometriosis surgery. There’s no clear-cut answer to this, as the outlook depends on the severity of the disease.

Generally, following surgery for endometriosis, your chances of getting pregnant improve and you can start trying for a baby around two weeks after the surgery. But get your doctor’s clearance first.

What if the surgery doesn’t work?

If, unfortunately, the answer to the question “can I get pregnant after endometriosis surgery?” is “no”, don’t worry – you still have good options.

If surgery is not an option or doesn’t work, you may freeze your eggs or try other options of Assisted Reproduction Techniques.

The bottom line is that getting pregnant after laparoscopy is improved. In early-stage endometriosis, it is useful to help diagnose and treat women with infertility problems.

What this amounts to is that a laparoscopy of the reproductive organs (a gynaecological laparoscopy) is quite often necessary. Infertile couples trying to resolve their issues usually stand to benefit from this procedure.

A laparoscopy can, therefore, be operative, not just diagnostic. Meaning that if something is found wrong, it can be dealt with there and then. Some tubal repairs may be unnecessary in the face of IVF technology.

But if you’ve had one or two failed IVF cycles, you’ll want to do everything you can to get to the root of the problem.

Being a minimally invasive type of surgery often used to investigate or treat fertility issues, it is also be used for other common types of abdominal or pelvic surgery such as an appendectomy, gallbladder removal, or gastric band placement.

Because it is so common, and because of its use in reproductive medicine, patients often have questions about how this kind of surgery might affect their chances of getting pregnant. While it’s true that every case is unique, the news is that it is not common for laparoscopic surgery to adversely affect your fertility when done repeatedly especially involving the ovaries.