As you enter the menopausal stage of your life, you might be wondering if you can still get pregnant. It’s a good question since the answer will affect family planning and birth control decisions.

Menopause is an important transitional time of life. Having hot flashes and irregular periods doesn’t mean you can’t get pregnant even though it could mean that you’re probably a lot less fertile than you once were.

Officially, you haven’t reached menopause until you’ve gone a whole year without a period. Once you’re postmenopausal, your hormone levels have changed enough that your ovaries won’t release any more eggs. You can no longer get pregnant naturally.

Menopause is that time of life following when your reproductive ability such as ovulation and sex hormone production has diminished to almost a complete stop. Although it doesn’t happen overnight, menopause is a gradual and inevitable stage of every woman’s life.

As your hormone levels fluctuate, you may start noticing symptoms such as hot flashes and night sweats. Your periods are getting irregular in length and frequency. Your ovaries may release an egg in some months, but not in others. Although your fertility is declining, you can still conceive. This phase can last for several years.

If it’s been an entire year since your last period, you’ve reached menopause, this could be anywhere between the ages of 40years and 55years, depending on other individual factors. As your estrogen and progesterone levels remain low, you would no longer ovulate and you cannot conceive a child.

The transition to menopause begins and ends at different times and factors such as family history and personal health history play a significant role.

Once you’re postmenopausal, your hormone levels will never, again, be in the suitable range for ovulation and pregnancy and your eggs are far less viable, but you can still take advantage of Invitro Fertilization (IVF).

As you age, hormone levels start to change, and you start transitioning into menopause, which can include hot flashes, mood swings, and other symptoms. Even though women experience menopause differently, certain trends in the age of onset and symptoms can provide some guidance on what you can expect as you get older.

As you are aging, your ovaries produce less of the hormones, estrogen and progesterone, and your periods become erratic for a time, and then stop. The physical changes that usher in menopause can begin as early as the age of 40years or may not start until your late 50s.

A couple of missed periods when you’re 40years old might lead you to think you’re pregnant, but it’s also possible to begin menopause around this age. You may go into early menopause, experiencing symptoms between the ages of 40 years and 45 years old. For instance, missing more than three periods in a row could be a probable early sign.

Because these can also be symptoms of pregnancy or other medical conditions, you should consider seeing your doctor for evaluation. Going into menopause early could prevent you from starting a family if you’ve been waiting. So, you may want to consider options like freezing your remaining eggs or using donor eggs to conceive.

When you are between the age of 48 years and 52 years, you will begin transitioning into menopause and your menstrual cycles will become more erratic. Symptoms include hot flashes, mood swings, night sweats, etc. While it’s harder to get pregnant naturally at this time, it is not impossible.

During your early fifties, you may be in menopause, or you may be making the final transition. Your ovaries are no longer releasing eggs or making much estrogen. The period can take several years. By the age of 55 years, you may have gone through menopause. Once a full year has passed since your last period, you’re officially postmenopausal even though you may still have some of the same symptoms you experienced earlier.

It is not unusual to become menopausal at a later age, but there are a few women who are late going into menopause. If you’ve already been through menopause, it doesn’t always mean you’re done with all the symptoms such as hot flashes.

To successfully conceive with IVF, you can either use the eggs that you had frozen earlier in life, or you can use fresh or frozen donor eggs. You should, however, consult with an experienced fertility expert.

Note that the older you are, the more likely you have a pre-existing health condition that could complicate pregnancy and delivery.

After menopause, you may be able to carry a baby to term through hormone therapies and IVF. But it’s not simple, nor is it risk-free. If you’re considering IVF, you’ll need an expert on fertility counseling and careful medical monitoring. 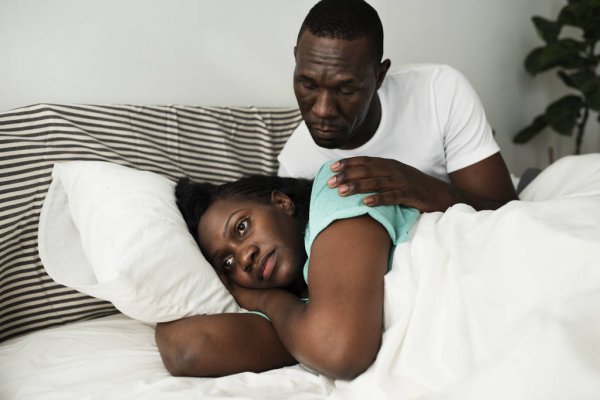 ﻿Secondary Infertility: When Completing Your Family is a Task to be Done